Lima will unexpectedly win your heart. This city is the largest and the capital of Peru. In addition, Lima has many facets that are not known abroad.

The history of Lima begins long before the Incas unified the great Tahuantinsuyo with the Lima culture. In the city you can still see Huacas, which are the oldest archaeological remains. One of the tourist sites in Lima, which although time has played against maintains that special charm is the Huaca Pucllana, this is one of the famous and best preserved in Lima, it is in the heart of Miraflores. The Huaca Pucllana was a ceremonial center that was occupied until the time of the Incas. In one of the excursions in Lima with Incas Peru we propose an exquisite dinner with views of this unique place.

The city has downtown areas, districts with modern infrastructure, with important hotels, restaurants, shopping centers, and nightclubs. Here you can find excellent tourist services, from 1 to 3 star hostels, 1 to 5 star hotels, 3, 4 and 5 star apart hotels, as well as 3 to 5 star restaurants; specialized in local, national and international food. Thus, Lima has districts that deserve to be visited, among which we have Miraflores, San Isidro and Barranco, where you will find from beautiful and pleasant parks and squares, to modern commercial and residential centers, pubs and nightclubs full of fun. On the beaches of these districts surfboard, hang gliding and paragliding are practiced.

The city of Lima is located between the valleys of the Chillón, Rímac and Lurín rivers, in the central coastal part of the country, overlooking the Pacific Ocean.

The city of Lima is located 154 meters above sea level

How is the weather in Lima, Perú?

These are some suggestions of what you can do in the city of Lima:

In recent years the capital city of Peru has been embellished with parks and has significantly improved the appearance of its squares. Visiting them will allow us to observe the daily life of the people of Lima, a conglomerate of races and customs, which will impress us with their kindness and contagious joy.

The Plaza Mayor or Plaza de Armas de Lima, is the founding site and the main public space of the city Lima, capital of Peru. It is located in the historic center and around it are important public and religious institutions, as well as monuments and architectural buildings.

It is one of the most important squares in the center of Lima and contains the equestrian statue of the Liberator of the country, Don José de San Martín. Around it we find large white buildings that mainly house important offices.

Icon of the city and undisputed symbol of the recovery of public spaces in Lima, it surprises Limeños and visitors with an impressive show that combines water, light and color. Its 13 fountains, in addition to its imposing architecture that has recovered its splendor, are the delight of children and adults.

The Campo de Marte is a large green enclosure in the areas of what was once the Santa Beatriz Hippodrome. It is a family gathering center, a space for practicing sports, jogging, gymnastics, Tai Chi, etc.

It is one of the most emblematic parks in Lima, due to its artistic and ecological infrastructure, its facilities are equipped for shows of national and international stature.

The Parque de las Leyendas is one of the most important zoos in Lima. In it are specimens from all over the world, as well as species from the three natural regions of Peru.

The churches of this city compete in beauty with the European ones. Not in vain, for many years of the colony, Lima was the city of riches and opulence. Almost all the priestly orders are present with their representative churches that compete with each other for their beauty.

The facade of the Cathedral of Lima is in the Renaissance style with Plateresque ornaments. Its tall towers with slate spiers are neoclassical with stylistic influences from the Escurialense school and from northern Europe.

The Church of San Francisco, located in the center of Lima, is a monumental architectural complex built in the seventeenth century and is composed of the basilica and the convent of San Francisco, as well as the Sanctuary of La Soledad and the chapel of El Milagro .

The Church and Convent of Santo Domingo is the oldest in the city, completed in the last years of the 16th century, it was during the Colony the main cultural focus of the city. The Universidad Mayor de San Marcos, founded in 1551, operated here until 1643. San Martín de Porras (1579-1639) lived in the cloisters of Santo Domingo, whose remains rest together with those of Santa Rosa Lima (1

The façade was built in 1710 out of stone, and it was decorated with beautiful ornaments. This is made up of three naves and three streets, of which the central one is where you access the building, where you can see the Churrigueresque style front that is one of the two best known doorways in the entire city that reflect this style. In this body you can see a

The Church of La Merced was started in the 16th century and finished in the 17th. Its facade has a beautiful baroque decoration. The enclosure, erected in 1687, contains a neoclassical main altar in which the image of the Virgen de la Merced predominates, as well as a carving of San Miguel Arcángel.

The enclosure has three naves and a dome, considered among the most beautiful in Peru. In its main altar you can see the holders of the church San Pedro and San Pablo, and in the central part is the Sagrado Corazón de Jesús

It houses on its altar the main religious image of Peru: the Lord of Miracles. The Church of the Nazarenas receives thousands of visitors throughout the year, especially in October.

Being the capital of Peru, Lima has attractive museums. Some of them are almost mandatory in nature on a proper visit to this city, others offer a good alternative to spend valuable time.

Museum of the nation

It is a meeting point for people interested in culture and art. It was the main place where the pieces of the Lord of Sipán were exhibited shortly after their discovery and where musical concerts of all kinds are held, especially those of classical music.

National Museum of Archeology, Anthropology and History of Peru

The National Museum of Archeology, Anthropology and History of Peru is the oldest state museum in Peru and is the headquarters of the National System of State Museums. Its importance lies in the vast and varied cultural heritage housed in its exhibition rooms and warehouses.

Surrounded by beautiful gardens, it is located within a unique viceregal mansion of its kind dating from the 18th century, which was built on a pre-Columbian pyramid from the 7th century.

Works of art, furniture from the colonial era and the catacombs are exhibited, which are a series of underground passages where the ancient inhabitants of the city were buried.

Origin and characteristics of the Real Felipe fortress. Relics, historical remains, replicas and allegories of events, customs and historical tradition of the army.

The Huaca Pucllana was a great ceremonial and administrative center of the Lima culture, during the Early Intermediate period (200 AD – 700 AD).

In early colonial times, Lima was the most important city on the continent, which was home to memorable palaces and mansions, built with the best materials of the time. Remarkable are the balconies that dress the exterior of these buildings.

The Government Palace of Peru is one of the most important buildings in the country, not only for its political implications and for being the seat of the executive branch, but also for being architecturally attractive and for keeping important artistic design objects inside.

The Goyeneche House was built at the end of the 18th century; it has received Bourbon influence. Architecturally it is composed with a compact harmony and unity between all the elements. By the time the property was built, the style that was in fashion (Baroque) had been imposed as the structure and architectural design par excellence, the House of Goyeneche was one of the

Palace of the Marquis of Torre Tagle

One of the best examples of colonial architecture in Lima is located very close to the Plaza Mayor. It is the Torre Tagle Palace, which was completed in 1735. This two-story building stands out for its carved wooden balconies, its Baroque-style oratory, as well as its carefully carved stone façade.

One of the most recognized icons of the Historic Center of Lima are the balconies of the houses of the old Lima aristocracy (such as the house of La Osambela), which adorn the small streets of the place and give us a feeling of traveling back in time. towards the colonial era, with all the panache and elegance that Lima Señorial had at that time.

The house where Admiral Miguel Grau was born, opened its doors on July 27, 1964 to become an impressive museum, where you can see testimonies of the life of the admiral and his ancestors.

This city does not escape, like the whole country, to present important archaeological centers. In this case, the oldest inhabited architectural complex in America “Caral” or the temple that housed the God of most ancient cultures (including the Inka) “Pachacamac”. Visit them and appreciate the past of the Incas to understand their greatness.

This extensive archaeological site gives a first impression of being a disorderly accumulation of mud walls, but if you look closely you will notice that it has an order established by long streets, pyramids, large walled spaces (courts) and areas with one-story buildings. .

Puruchuco is a pre-Hispanic palace, east of Lima. It was built in the 15th century, during the Inca domination of the central coast, to be the residence of the curaca who administered the resources of the middle valley of Rímac. Here food was deposited and redistributed respecting the laws of Tahuantinsuyo.

The millenary Huaca Pucllana is one of the most attractive and mystical corners of our beloved Miraflores (District of the city of Lima). The Huaca Pucllana has been recovered from the abandonment in which modernity had postponed it and now stands imposingly for the approval of all Peruvians and foreign tourists.

Pachacamac is one of the largest and most important archaeological sites in Peru, and in its time it was the most consulted huaca (oracle) in the Andean world, leaving a deep mark that continues to this day.

Caral is the oldest city in Peru (more than 5000 years) and was the seat of the first Andean civilization that forged the foundations of its own unique social organization, which together with Mesopotamia, Egypt, India, China and Mesoamerica are the original foci of culture in the world. 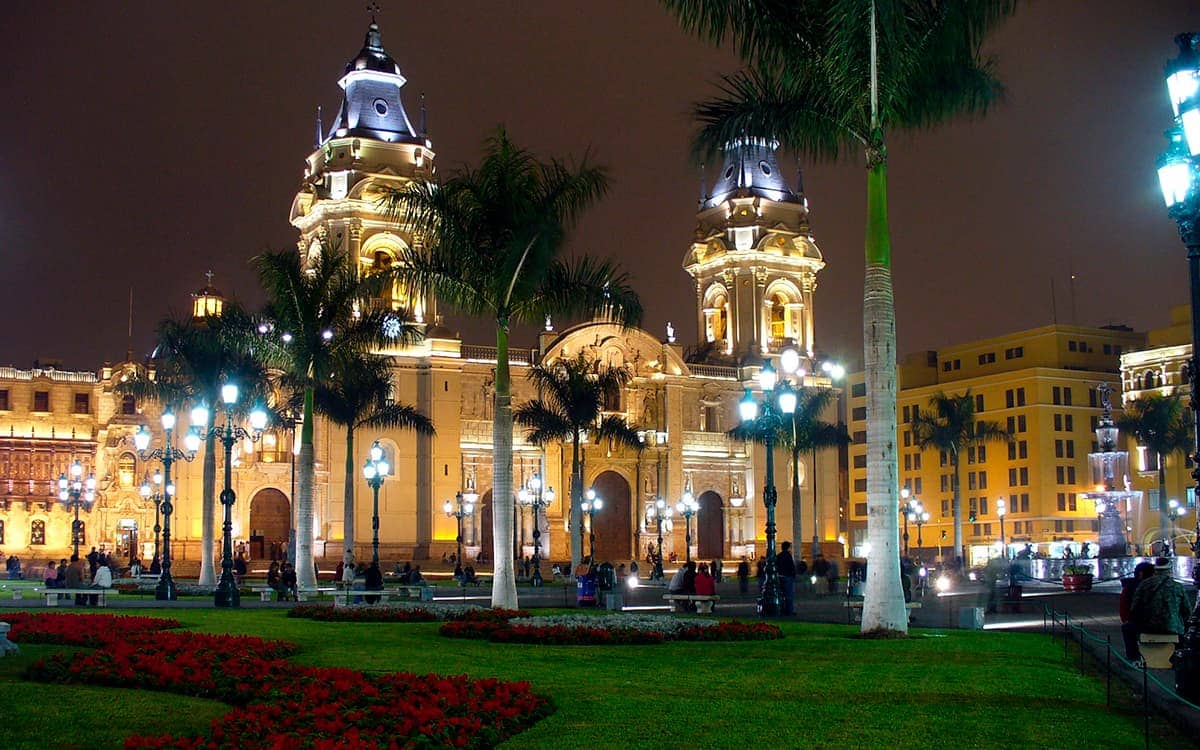 The historic center of Lima contains great treasures that cannot be missed. We will explore the Catacombs of San Francisco, we will also visit the Santo Domingo convent and the most emblematic open-air places of Lima such as the Plaza de San Martín, Plaza de Armas de Lima, Jirón de la Unión and many more learn about Limeña history.